So very Many People Have Seen Michael Perform!

Client Testimonials.  From Anonymous to Notable!

“It was great to see you so spontaneous.”

“It was great having you here and getting to know you. You are not only a wonderful performer but fun to get to know.”

“I have heard nothing but raves about your performance from the people who attended the banquet.”

“It was a pleasure working with you yesterday. You really know how to pull an audience together.”

“Hilarious..Just what our company was looking for!”

“I heard nothing but positive comments and rave reviews”

“I loved the routines. They have a different place in your repertoire. The best part was looking at the reactions of the audience. I laughed the hardest at you…knowing what had to be going through your mind. The pingpong ball bit was outstanding. The doll bit was excellent. Don’t ever stop. What great stuff. Creativity.”

“We saw you on the Golden Princess with and without your props over Xmas and New Year! Best entertainment we’ve seen for a long time. Keep up the good work.”

“All I can say is WOW!! You really dazzle the audience. The woman next to me almost had a seizure laughing so hard.”

“Congrats, you have just won the hearts of my parents and my grandmother. After my show on Sunday, they had some time to kill between shows and watched your show. Well, thanx a lot b/c they honestly will not shut up about you and your show! They absolutely adored you, and every time I turn around they ask about you or tell me about a different part of your show that they just remembered and decided to share with me. It’s really cute. So I thought you’d appreciate some positive audience feedback.”

“Hi Michael. Thank you again for coming and performing for the Stand UP. People are still talking about you and your performance. It is one of the best acts I have ever seen in my 37 years. 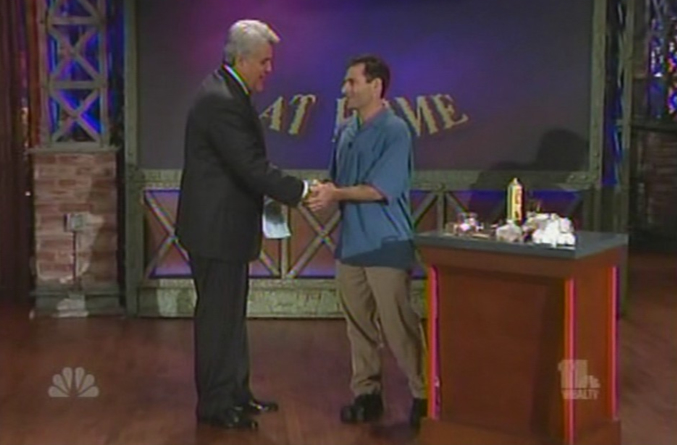 "It was great to see you so spontaneous."

(After the airline lost Michael's props prior to his second performance at Bruce's home!)

(Michael has also appeared on Jay Leno, Wendy Williams, and others!)